**Note: your browser either has JavaScript disabled or it isn't supported. Some elements of the website may not work properly.**

The North Dakota Department of Transportation (NDDOT) is currently implementing a Centerline and Edgeline Rumble Stripe Program across North Dakota. The stripes have been installed on many of our two lane highways as a safety measure to help prevent traffic fatalities and injuries from motor vehicle crashes. Rumble stripes are grooved patterns on the roadway that provide a rumbling sound and physical vibration, immediately alerting inattentive drivers they are leaving their driving lane. Rumble stripes are an effective countermeasure for preventing roadway departure crashes.

The use of Centerline and Edgeline Rumble Stripes are documented as being a cost effective improvement in reducing head-on crashes, opposite direction sideswipe crashes and Run-off-the-Road (ROR) crashes. 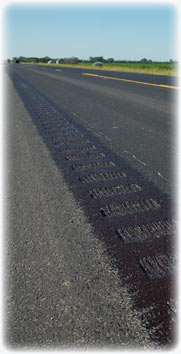